Six very different regions are spread over 19,853 km and have a lot to offer to nature lovers. There are nature reserves in all counties and most of the cities in the county, 520 of them in total. There are also 8 nature parks (Pfälzerwald, Saar-Hunsrück, Nassau, Rhein-Westerwald, Südeifel, Nordeifel, Vulkaneifel, Soonwald-Nahe). With the landscape protection areas this results in a share of 54.8% of the total land area.

There are 22 health resorts and spas in Rhineland-Palatinate. In the Westerwald / Lahn / Taunus region, for example, there is Bad Ems, one of the oldest bathing resorts in Europe, where Emperor Wilhelm I had his cure. In the Eifel, the Eifel water bubbles up to 36 degrees warm from the earth in numerous thermal springs and unfolds its healing effect. With over 400 million years, the Eifel is one of the oldest mountains in the world. Unique for Central Europe, many volcanic phenomena in a small area bear witness to the glowing past of the earth. Over the centuries, many volcanic cones have filled with water - the so-called "maars" give the Eifel a mysterious atmosphere.

The region Hunsrück / Nahe / Glan is a low mountain range between Mosel, Nahe, Saar and Rhine. 800 meters high rocks interrupt the hilly country again and again. More than 850 different ferns and flowering plants thrive here. The 816.32 metre high Erberskopf is the highest point in the country. 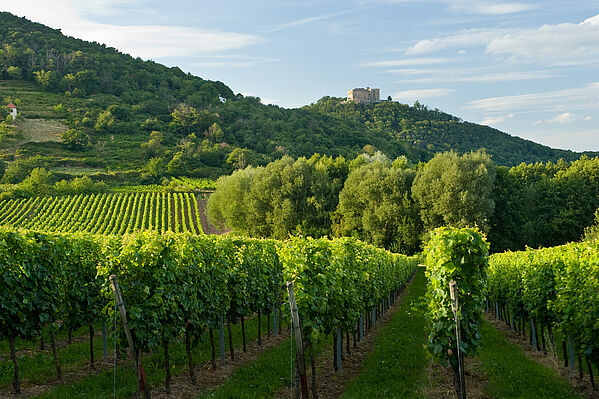 In the Palatinate, the sun laughs more often than in any other place in Germany. The mild climate allows lemons to bloom, tobacco to thrive and 36 white and 16 red grape varieties to ripen. A total of 6 of the 13 German wine-growing regions are located in Rhineland-Palatinate. Together they produce 2/3 of the German wine. The region offers many attractive holiday possibilities: The Pfälzer Wald Nature Park, the Pfälzer-Nordvogesen Biosphere Reserve, recognised by UNESCO in 1998, is Germany's largest contiguous forest area.

The entire Moselle landscape is characterised by steep vineyards. Here, among other things, Riesling is produced: with plenty of sunshine and slate soil, it has ideal conditions to develop its stimulating taste. From Trier to Koblenz, the Moselle flows through Rhineland-Palatinate for 200 km. And yet, the longest river in Rhineland-Palatinate is the Rhine. Rheinhessen is the largest wine-growing area in Germany and the largest Silvaner-growing area in the world. 40% of German wine exports come from the grapes harvested here.

Several ten thousands of animal and plant species live in Rhineland-Palatinate. Together with its habitats and the genetic resources associated with them, this biological diversity is also a richness that shapes the cultural landscape and must be protected. Every year, for example, the country calls on people to take part in Species Protection Day to honour and celebrate biodiversity.