The agricultural sector is one of the most important sectors of the Rwandan economy and, with 30% of the country's economic output, is in second place behind the service sector. The sector is considered to be the engine of Rwanda's economic growth and the majority of jobs in the country depend on agriculture. About 75% of the population is directly dependent on this sector. The products most cultivated in Rwanda are plantains, cassava, potatoes, sweet potatoes, corn and dry beans.

However, agricultural production faces major challenges: Due to the extremely dense population density of the country and a very high population growth, there is an increasing shortage of land and intensive exploitation of the land. Today, more than two-thirds of the country's total land area is already used for agricultural purposes; the trend is rising. The picture is dominated by subsistence farming and smallholder farming methods. However, this results in low agricultural productivity. In the past, this has led to an increasing threat to food security in combination with largely poor-yielding soils, which are leached out through intensive use and application of fertilisers, and in combination with massive erosion problems and a lack of appropriate countermeasures. On average, a smallholder family has less than one hectare of land available for cultivation. However, this is not enough to support a family.

Food security not yet in place despite positive development

According to FAO data, there is no food security in Rwanda, but statistics show a positive trend: Between 2000 and 2011, the proportion of people suffering from malnutrition fell from 47% to 29%, although the proportion of malnourished infants is much higher at 40%. However, the proportion of malnourished people has now risen again to almost 37% (2018). The expansion of irrigation systems, the consolidation of land plots and the expansion of terrace cultivation have contributed to this positive development. Despite the increased availability of food in the country, there are considerable problems with access to this food: In the period 2011-2012, 20% of the population report seasonal access problems, 17% acute and 14% even chronic access problems to sufficient food. This indicates that, in addition to an increasing production, access to sufficient and adequate food must also be ensured and promoted. A further contribution to the positive development in the area of nutrition is made by the improved productivity of the livestock population, which accounts for 70% of Rwandan households. In addition to providing important nutrients, such as milk and meat, the livestock of a household serves to cushion shocks in the event of climatic or economic crises. Despite the positive development, however, the consumption of dairy products remains below the level recommended by the FAO. Government contributions support the positive developments in the agricultural sector with programmes such as the 'one cup of milk per child' school feeding programme or the 'Girinka - one cow per poor family programme', which aims to support 350,000 families with one cow within ten years. 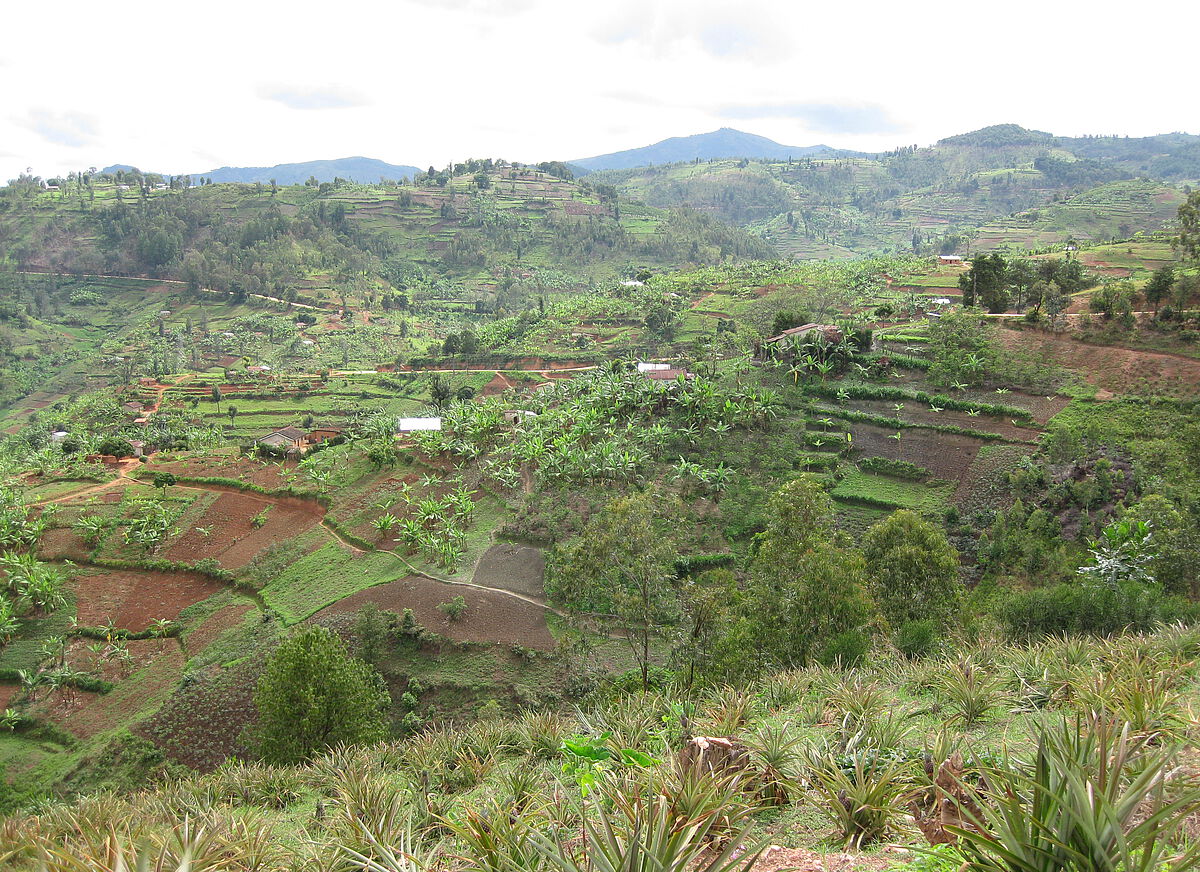 The use of wetlands, whose fertile land is cultivated by the increasing number of agricultural cooperatives, the introduction of efficient seeds, the use of fertilizers and erosion control with the help of nationwide terracing measures play an important role in increasing yields. If terraces are well constructed and working time and costs for their construction can be controlled, they prevent silting up of agricultural land and excessive soil loss. They simplify field cultivation and enable the use of modern farming methods, conserve water and soil fertility. Depending on the type of seed, terraces can increase yields in the long term. Already today, the landscape in Rwanda is strongly influenced by terraces.

"Vision 2020" is the name of Rwanda's most important government document, which was completed in 2002 and in which the country's fundamental development goals were formulated. All national and sectoral policies and strategies are based on this document. Agriculture is mentioned in the "Vision 2020" as a priority sector for the country's economy. With regard to the agricultural sector, Vision 2020 identifies the following objectives: The aim is to transform production, which until now has been predominantly subsistence-oriented, into commercially-oriented agriculture, thereby increasing household incomes and reducing poverty by 50% by 2020. It also aims to diversify Rwanda's agricultural exports, focusing on increasing tea and coffee exports. Livestock is also to be further developed because of its importance for the food security of the population.

In "Vision 2020", the development of environmentally friendly forms of energy, such as hydroelectric power, also plays an important role. So far more than 95% of the energy demand is covered by the traditional fuels wood and charcoal. This poses a major problem for the sustainability of forests. In addition, a reform of the land ownership structure should promote the emergence of cooperatives. At present it is not possible for most families who own less than one hectare to earn a sufficient living. The economic form of cooperatives, which is currently being promoted in the country, aims, among other things, to make larger and more fertile areas available to small farmers for agricultural work. This is done by consolidating land and making it possible to use public, state-owned and particularly fertile land, such as wetlands. Many cooperatives are also provided with subsidised materials, such as fertiliser, by the government. The state is making serious efforts to reforest and convert remaining forests that have been spared from slash-and-burn and illegal logging into nature reserves.

The central goal of the Rwandan government is to develop a green economy by 2020.