Rwanda is located in the eastern central Africa between 1° and 3° latitude south of the equator. It borders Uganda to the north, Tanzania to the east, Burundi to the south and the Democratic Republic of Congo to the west. Its land area is only 26,338 km² and is thus one of the smallest states in Africa - in comparison, Rhineland-Palatinate and Saarland together are about the same size. The landscape is characterized by a hilly plateau. There are many elongated hills, some of which end in steep slopes or swampy valleys. So it's unsurprising that Rwanda's nickname is the "land of a thousand hills". 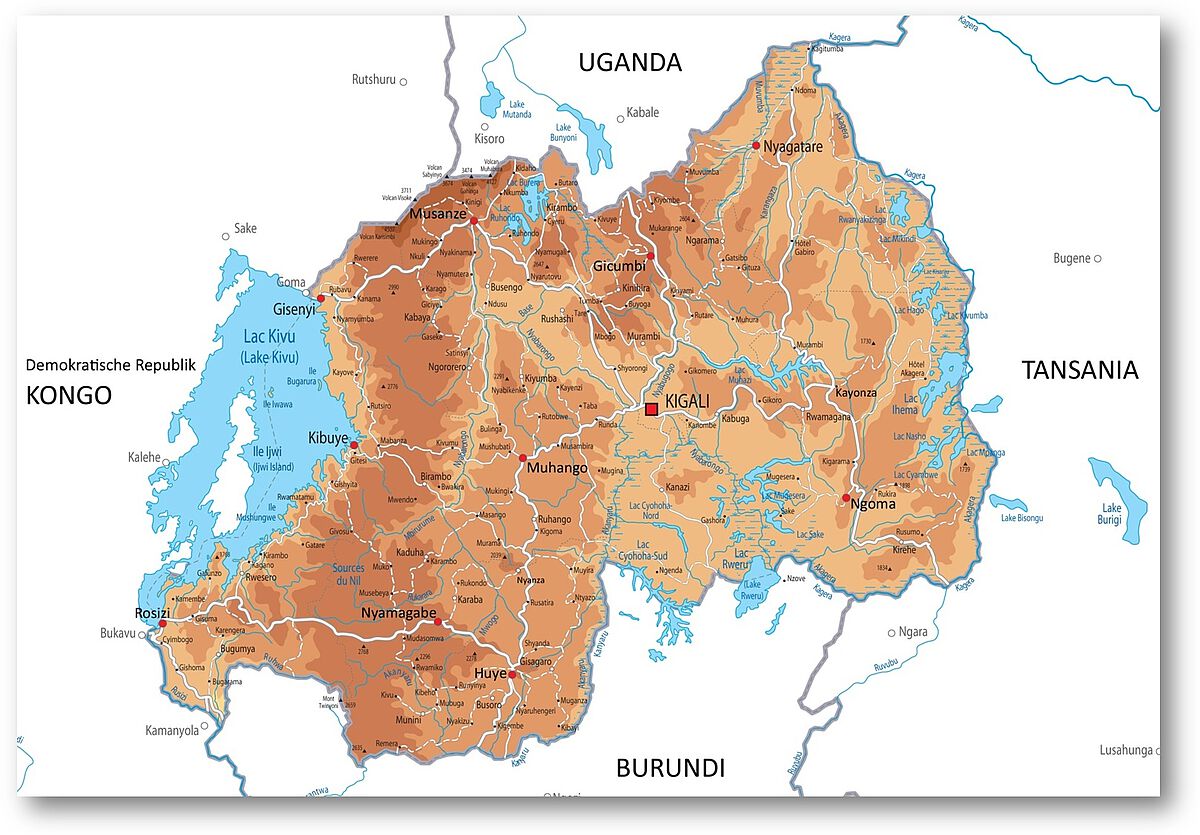 The highest peak of Rwanda is the Karisimbi with 4507m height in the volcanic Virunga mountains in the north. While the west has a strongly cut mountain edge, the east of the country is characterized by a dry savannah with a vast swamp area, including the Akagera swamps but also many lakes. Although Rwanda is a landlocked country, it is located in the Great African Lakes region. Remarkable in the west is Lake Kivu, which is located in the border area to the Congo. It is 2650km² large and up to 450m deep. Since the lake has high concentrations of gases, it can also be used for energy-producing purposes. Important rivers are the Nile tributary Nyabarongo, which becomes wide enough at Kigali to be navigable and the Akanyaru, which both unite to the Akagera and form in the east the natural border to Tanzania.

The climate is mostly humid. There are two rainy seasons, one from March to June and the second from October to November, which are interrupted by a small and a large dry season. The annual precipitation is between 750-2000mm. From July to September it is mostly dry, the wetter season is between February and May. The tropical and high altitudes mean that the climate is temperate throughout the year. The maximum temperatures of over 30°C and the minimum values of under 15°C are rarely exceeded or undercut. Since the largest temperature fluctuations take place within a day and not during the year and thus a constant average temperature of 18-21°C prevails in the year, the country has also been given the nickname "Land of eternal spring".